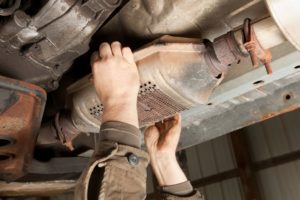 What is a catalytic converter?

A catalytic converter is something that has been an essential element in vehicles since 1974. It plays an important role in protecting the environment and public health. A catalytic converter is an exhaust emission control device that reduces toxic gases and pollutants in your vehicleâ€™s engine into less-toxic pollutants. It is an unassuming-looking round canister that is part of your exhaust system, located between the engine and the muffler â€“ usually on the passenger side.

Why do thieves want them?

Catalytic converters contain three expensive metals â€“ platinum, rhodium, and palladium. Thieves can sell the converters to scrap yards for as much as $200 apiece. However, it could cost in upwards of $2,000 to replace it. Question: Can your vehicle get by without a catalytic converter? Answer: No. Your car will not run properly without it, and it is illegal for vehicles not to have one.

How can you tell if your converter is missing?

There will be no question if your vehicleâ€™s catalytic converter is missing. The first time you turn on the vehicle after the catalytic converter has been stolen, you will hear a loud rumbling or roaring sound. It will get louder if you step on the gas. If this happens, you should check underneath the vehicle. There will likely be a gaping space in the middle of your exhaust and you should be able to see where the piping was cut away.

What can you do to prevent catalytic converter theft?

If you determine that your catalytic converter has been stolen, you should notify the police and contact your insurance company. Before this happens, we would like to share some strategies to prevent this from happening to you:

We would like to thank Southern Mutual Church Insurance and GuideOne Insurance for this information.

Also see our guidance on:

Protecting your Property during the COVID19 Pademic.